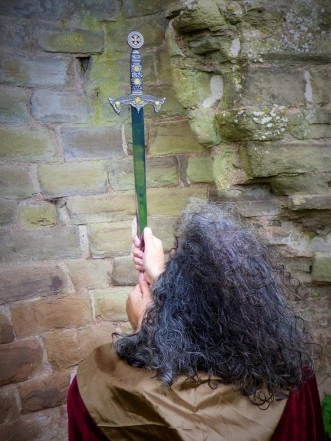 There was a great feast where all those who yield a mighty sword met to discuss who among them is the greatest swordsman. After much debate, only a few stood out. Naturally they were the most famous swordsmen that were known for their legendary feats.

First the Arch Angel Michael came forward and demanded that he be recognized as the greatest swordsman. Arch Angel Michael said my record speaks for itself. I lead god’s Army, I defeated Satan and his followers allowing god to caste them from heaven. People invoke me to fight against evil. Someone around the banquet table took his gold goblet filled with wine, and in one gulp poured the wine down his throat and held the goblet high in the air. Then he turned down the goblet and slammed it on the table. He is in disapproval; he blurted out Arch Angel Michael does not make the cut! Then the banquet hall erupted with voices arguing for or against proclaiming Arch Michael as the greatest swordsman. Finally, Chief Justice Thurgood Marshall who was appointed to chair the discussion and to proclaim the greatest swordsman banged his hammer and called for order and decreed an explanation from the person who turned down his goblet in disapproval.

Lion-o the leader of the Thunder Cats roared and said the title of the greatest Swordsman should go to me. My species have survived and flourished, I united a diverse world and have been crowned the King of the Jungle, and even the mighty elephant pays homage. Not only have I proven my might with the mystic Sword of Omens; but I’m so cunning that I always defeat challenges from my arch enemy the immortal Mumm-ra whose mystic powers could have easily incapacitate me.

Just has Lion-o finished his speech, Don Da Da stood up with his goblet and turned it down; yet again the banquet hall erupted in argument. Chief Justice Marshall slammed his hammer and called for order then decreed that Don Da Da explain himself.

Chief Justice Marshall was in total agreement; he cautioned that Lion-o should have recognized that with great power comes great responsibility. That Lion-o failed in his responsibility to safe guard the Sword of Omens and its destruction almost ended in the extinction of his species. Therefore Lion-o cannot be considered to be proclaimed the greatest swordsman.

King Arthur stood up and said it is I who wielded Excalibur, with it I united the Knight factions and created the round table. We all know what happened when Excalibur clashed with the Sword of Omens. No one as seen a swordsman such as I for a thousand years before the Lady of the Lake handed me Excalibur and a thousand years after Excalibur was handed back to the lady of the Lake. It is I who should be proclaimed the greatest Swordsman. The Knights in the banquet took their Swords and banged on their shields as a show of support.

After the Fairy Tinkerbell whispered in Chief Justice Marshall’s ear; he slammed his hammer and called for order. He said King Arthur makes a compelling case; but Tinkerbell reminded me that the King is unworthy to be proclaimed the greatest Swordsman. This is because he murdered his best friend Sir Lancelot and broke the Round Table. All of it over a woman; it conflicted his sense of duty and leadership.

Then Red Sonja stood up and stated that you men are not the only ones who possess the skill, grace and might with a sword. In fact I resent that this recognition be known as the greatest Swordsman; it should be known as the greatest Swords fighter. Look around the banquet hall and you’ll see just as many women as there are men. With that said the Shield Maidens, the Amazons, and female Samurais and other individual female Warriors all stood up and applauded Red Sonja’s speech. With the support of her female bregin Red Sonja put in her nomination to be proclaimed the greatest Swords fighter.

Chief Justice Marshall slammed his hammer to call for order; and said that Red Sonja is correct, that gender is immaterial to whoever is proclaimed the greatest. Then he decreed that the proclamation is to be known has the greatest Swords Fighter rather than the greatest Swordsman. But unfortunately Red Sonja, doesn’t make the cut because she is driven by anger and have a general hatred of men. Members of the Amazon Warriors are also disqualified because they turned to black magic that made their young grow up to women hood within 9 weeks after birth.  The Shield Medians are also disqualified because they use their skill and might in the company of their Viking companions to raid, plunder and strike terror.

Chief Justice Marshall announced that he has already made his decision; that the person he choose has truly walked the way of the Warrior. The chosen person displayed all the attributes that disqualified the Arch Angel, Lion-o, King Arthur, Red Sonja, the shield Maidans, and other. Yet, despite having the skill and might to kill, learned the art of healing and went back to all the lands and groups that suffered under her reign of terror and atoned for the moral corrupted actions. Earning respect and no longer feared. This person has become so modest and humbly has not even asked for recognition among peers. Forged in the heat of battle, I proclaim Zena the Warrior Princess to be the greatest Swords Fighter.