It wasn’t too long ago that I met and was hanging out with some people who not only studied human communication and to a degree behavior. They put what they studied into practice. Most of the time they used in to perfect their seduction game https://truegeorge.com/2015/07/26/secret-society-of-pick-up-artists/. Picking up women especially those who won’t normally go for the type of person that they are was fun with the reward of getting the draws and perhaps some of their friends would wind up giving up their draws too once they see their friend getting something good. So it wasn’t a matter of “if” it was a matter of “when” all because we communicated with them.  Yet the techniques had more implications especially when some of them registered a course with the NYC Learn Annex organization. They taught the covert persuasion languages that people with influence use with those who are most likely their followers top sales people use or even con artists and your clergy men. A ton of money was made. So out of those techniques we’ll just take a look at embedded commands.

I’d like to think of the use of embedded commands as the nuclear missile in your arsenal of verbal missiles. It is also the doorway to covert hypnosis, and persuasion. The purpose of embedding a command is because unless the person with whom you are communicating with is in an environment such as the military, police, or a member of a religious sect, most people if not all; will put up some type of resistance if you give them a direct order or command them to do something. Tactically embedding the command will decrease, or eliminate that resistance. It is not like what you see on T.V.  The commands are embedded inside a sentence which is recognized by the sub-conscious mind, which will pick it up and apply it to the person whom you are communicating with. Moving their mind in the direction where you want it to go.  Questions as well as commands can also be embedded into a larger sentence structure. Both can be delivered either by voice tonality, or by a process called marking. Commands could be delivered through a process called negation. 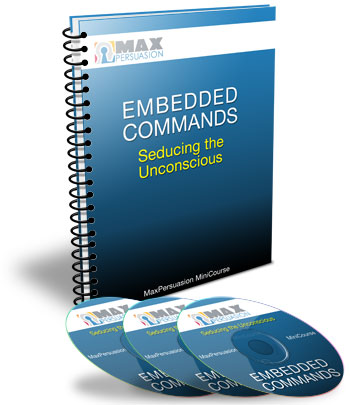 Let’s look at delivering commands through voice tonality. You might want to think yourself as being a hypnotist. That is because hypnotists use the same techniques in a formal setting. When the hypnotist is delivering suggestions, he does so by varying the tonality of his voice. In the case of everyday conversations, that tonality can be used to covertly deliver suggestions/ commands in a manner that the person will not realize what you are doing on a conscience level.  The only thing that will happen will be the application of your suggestions, that is because the sub-conscience, the controller of our behavior will recognize the suggestions/ commands and apply them. The person will not resist because they will think that they were the one that came up with the idea, thought, belief that you suggested; or the action that you had commanded them to do.

Notice in the English language there are three types of sentences. Those sentences are questions, statements, and commands. Each of those sentences is recognized by the tonality that we use when we are speaking. When we are asking a question, there is an upturn in our tonality. When we are making a statement, our tonality is even, and when we give a command there is a downturn in our tonality, after a pause. Look at the examples below, and when you do, notice the tonality of your voice as you read them, as you notice the tonality, you will then know that what True_George have written is true, if you think otherwise let me know.

Ok, now that you have got the importance of tonality, let’s see how the commands are delivered.

The commands are delivered by phases. There are lots of phases in the English language and with some creativity any phase could be used to deliver embedded command; what the phases does is set up the sentence so that you could implant the command verb by using the tonality of your voice. Below are some examples of a command verb, just in case you don’t know what a command verb resembles. After that I will put an example of everyday common phases, which could be used to deliver that command.

I hope you get the picture; a command verb is any word that describes the action that you want to take place. Now let’s look at some of those phases:

Analogue marking is another behavior that we as humans do naturally. An expert communicator can recognize when someone is doing that kind of non- verbal communicating. This is because analogue cues can be used to embed commands. It works by setting the command apart from the sentence by using some sort of non-verbal cue, or varying the volume of the voice. Like tonality, the person with whom you are communicating with will not consciously notice what is going on, but the sub-conscience will notice and it will apply the behavior.   Examples of nonverbal marking is as follows:

Questions like commands can be embedded. Questions are embedded in a manner as to decrease the listener’s resistance to answering whatever you want to know from them. The easiest way to embed a question within a sentence is by voice tonality. As mentioned above, the tonality of a command is a pause, then a down turn in tonality. To embed a question, all you have to do is say the question with the slight pause and down turn your tonality. Consciously what you have said will be recognized as a question, however due to the tonality of voice that you had used, the sub-conscience will recognize it as a command, and will apply the behavior, getting your question answered.

Another way to deliver a command is through negation. Negation works by telling the person that they don’t have to do what you are asking them to do. In general people tend to lean towards the negative, and if you use negative words to direct their behavior they will respond by doing exactly what you have told them not to do. All you have to do is put words like don’t, shouldn’t, do not, etc, in front of what you want them to do, and watch the fun. So, if you really want someone not to do something, you have to tell them not to do the behavior in other words. Here are examples of how to use the negative to direct somebody’s behavior.

Now remember embedded commands are command verbs inserted within a sentence structure, the purpose is to get rid of resistance that a person will have if you ask them to do something.  It is delivered in a manner, which the person with whom you are communicating with is not consciously aware but the sub-conscience recognizes, through varying the tonality of the voice, or by analogue marking. Questions can be asked in the same manner, getting rid of resistance to getting information from somebody. Negation is another way to deliver a command, because most people respond to the negative, we simple tell them not to engage in the behavior we want them to do. Typically they will do what you asked them not to do. These were developed from the natural behavior that we as humans do.

There are no step-by-step instructions, the only step-by-step instructions come from people who actually go out and use the techniques. I can attest to embedding a command using tonality because I have done it, and I am doing it on a continuous basis. I have used it to ask questions, and I have used the analogue marking, I know what works for me. You would have to be creative, and have the attitude that leaves behind a trail of techniques.