The news of the week was concerning the death bed confession of Bill Oxley a former Central Intelligence Agency (CIA) operative. Oxley was a a high-level operative with secret clearance. He was with the CIA for 29 years. Among various training he received he was also a marksman and received sniper training. Oxley was also trained in non-conventional ways of assassination. He used methods such as poisons, explosives, inducing heart attacks and cancer. He was assigned to an operative team of three and from March 1974 to August of 1985 the team was given missions to carry out the assassinations of individuals that the CIA deemed as threats to the agency’s goals or that their ideas and influences were a treat to the interests of the Unites States. Most of the victims were political activists, Journalists, Union leaders, occasional some scientists, artists, medical researchers, and musicians.
Among the string of confessions that Oxley made, the one that stood out was his confession of being the person who assassinated Bob Marley. But wait a minute! Didn’t Marley die of brain cancer? Yes, it is true that Marley succumbed to brain cancer. It was one of the non-conventional ways of assassination. Oxley said that the Marley job was unique out of all the jobs he done because he actual felt something for Marley that he never felt for any of his other victims.

He was succeeding in creating a revolution that used music as a more powerful tool than bullets and bombs. Bob Marley in 1976 was a very serious threat to the global status quo and to the hidden power brokers implementing their plan for a new world order. As far as the agency was concerned, Bob Marley was too successful, too famous, too influential… A Jamaican Rastaman who started using his funds and fame to support causes around the world that were in direct conflict with the CIA… To be honest, he signed his own death warrant.”

“It’s not like we didn’t warn him. We sent a few guys to shoot up his house in Kingston,” “We had a message for him. We impressed upon him the gravity of the situation he found himself in. He didn’t listen.”

“Two days later, in the mountains, I stuck him with the pin.“

“I gave him a pair of Converse All Stars. Size 10. When he tried on the right shoe, he screamed out ‘OUUUCH.‘

“That was it. His life was over right there and then. The nail in the shoe was tainted with cancer viruses and bacteria. If it pierced his skin, which it did, it was goodnight nurse.”

“There had been a series of high-profile assassinations of counter-culture figures in the United States in the late sixties, early seventies. By the time Bob Marley’s time came around, we thought subtlety was the order of the day. No more bullets and splattered brains.”

“The last time I saw Bob before he died he had removed the dreadlocks, and his weight was dropping like a stone,” he says.

“He was very withdrawn, unbelievably small. He was shrinking in front of us. The cancer had done it’s job.”

“The day he died in Miami was definitely one of the most difficult moments in my career. I felt real bad. For a long time I wasn’t comfortable with my part in his death. But eventually I came to realize it had to be done, for America.” 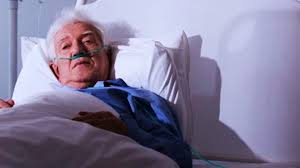 It all sounds good; except for one thing; the photo of the dying man is not Bill Oxley. The person in the picture is actual a Polish stock photo model and the Photographer is Kataryzna Bialasiewicz who works for a Micro stock company in Poland. So the image of Bill Oxley dying in Mercy Hospital in Maine  has been debunked leading to questions asking does this Bill Oxley exist?

From what is on the social media and the word on the street many people think that the claims that this Bill Oxley has made is genuine. After all there has been a rumor for many years that Bob Marley’s cancer was induced by the CIA or the Jamaican political parties. There was a rumor that Carl Colby the son of the former CIA director William Colby gave Marley a pair of boots and in one of the boots was a radioactive copper wire that pricked Marley’s toe when he tried the boots on. Also Josef Issels the Doctor that Marley saw in Germany was an ex Schutzstaffel (S.S) officer who was working with the CIA and that he made sure that treatments would be ineffective. People want to believe that Bob Marley was assassinated and now that a report of a dying old man making a death bed confession has surfaced it is not being questioned even though the image of the dying man is false.

I hate to say it but all roads are leading to fake news out lets. The death of icons and other celebrities are always shrouded in mystery; but sometimes a spade is a spade and a lot of these celebrities exhibit questionable behaviors that lead to their death which was not the result of any third parties. In the case of Bob Marley when it was discovered that there was acral lentiginous melanoma, under his toe nail there was an opportunity to have the toe amputated before it spread to the rest of his body. Marley refused to amputate the toe citing that it will desecrate the bodily temple and it is against Rastafarian belief. So Marley had the power to determine the timing of his mortality.

Otherwise to believe that the CIA had something to do with his death concrete evidence would have to be presented. Declassified documents similar to the ones like the MK Ultra or the CIA killing of the 153-old woman in the Eventide facility fire in Jamaica. Plus, documented CIA activity in Jamaica designed to discredit the Jamaican government under Michael Manley and influencing election results also pressuring the Jamaican government to limit Fidel Castro’s influence on the Jamaican Island. In classic fashion a similar operation that took place in Jamaica was carried out in Chile……but that’s another story