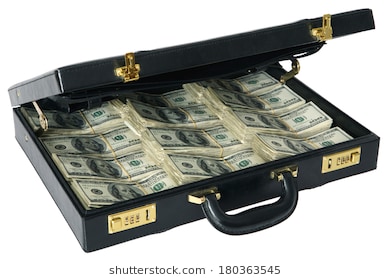 During the time when I was at a place where I considered it to be a working vacation; It was the fourth of July and I was at my post at the Stoney Lonesome gate performing my assigned task.  There wasn’t much traffic; perhaps people were staying away form the post because of the fourth of July. I went into the tent that was set up to get out of the hot sun since there was nothing happening. Since I was there relaxing I decided to do some basic energy movement. I started out with the movement of energy, up and down and as I was doing that; I started to see an image of a leather brief case. The leather brief case had the numbers 1016811 on the front. I saw that the brief case was being opened; there was nothing inside except for a small hand case. The zipper on the hand case was opened. Inside the hand case, there were a bunch of dollar bills, it was a bunch of twenties, then the hand case was closed and it was put back into the brief case which was also closed.  I took the opportunity to take a good look at the numbers that was written on the brief case, and I wrote them down.

The second basic exercise that I done was the extortion of the energy, at that time; when that was taking place I started to see images of people sitting around a dinner table, I did not hear what was being said and I did not recognize the people around the table. After that I saw an image of a pile of magazines. I saw the titles of two of the magazines, it was “Sukia,” and “South Nunca,” The “Sukia” magazine is the adventures of a female vampire living in modern day NYC that I sometimes buy and read, the main reason was to improve my Spanish reading comprehension. The other magazine “South Nunca” is a title of a magazine that I have never heard before. I don’t even know if that particular magazine exists.

The final energy exercise that I done was the absorption exercise; I started to absorb the energy that I let out back and perhaps the environment’s energy also. There were two other people McKay (KIA: Afghanistan) & James in the tent with me; nobody were talking we were just in to get out the sun and to relax a little; yet when I had absorbed the energy the energy I heard a voice of one of the them; it was Mckay’s (KIA: Afghanistan) voice.

The energy was flowing easily at this location on post. Either that or I was more relaxed.  While recording theis experience that took place on July 4th I just realized it was McKay’s birthday…R.I.P