It has been eleven years since the unit (258 Field Artillery C-Battery) arrived to the Middle East and ten years since the return of the unit. There has been talk among unit members that we should have a reunion. This had me reflecting about the events that took place this month (April, 2004) eleven years ago from when we left Fort Dix/McGuire Air Force Base on that cold rainy day to the desert heat at our first stop in Kuwait; it was not without drama. Well, come to think of it the whole pre-deployment training was drama filled. But I’ll talk about that another time, let me just tell you’ll what happened when we left and arrived in the Middle East. Anyone from the unit reading this, I hope you confirm or correct what I’m saying.

First was something that could have been avoided. My squad leader SSgt. R gave two soldiers permission to go to the Post Exchange, when the 1st Sgt did not want anyone to leave the area because the bus to the Air Force base will be arriving. In formation when the 1st Sgt found out that two soldiers were missing he started to cuss and carry on, in my head he acted like a fool because he was doing the ranting and raving in front of the unit member’s family and friends who came to see us off. I wonder what they were thinking. At least SSgt. R took responsibility for the stupidity of giving the soldiers permission to leave the area when he knew no one was supposed to leave. So the buses came and we boarded the buses absent three soldiers. The two that went to the Post Exchange and the third one Cpl. Forebell who claimed he used to be a member of the Haitian Army before immigrating to the U.S and joining the U. S Army; he just disappeared. When we got to the Air Force Base airport, the Chaplin’s car pulled up with the two soldiers that went to the Post Exchange.

Upon arrival to Kuwait, and in process and briefings, we went to get our equipment that was loaded off the plane. Well lord and behold, someone lost their ballistic vest. He did not secure it as he was instructed to do. Again, the 1st Sgt started to cuss and carried on. My Thoughts were if he is going to act that way throughout the deployment, he is likely to get shot by someone before the deployment ends. We spent the rest of the night searching for that ballistic vest when we were supposed to be relaxing. At least this cluster fuck took place at five in the morning, because all that foolishness had to end by six because we had to board a bus to take us to Camp Victory (Kuwait). 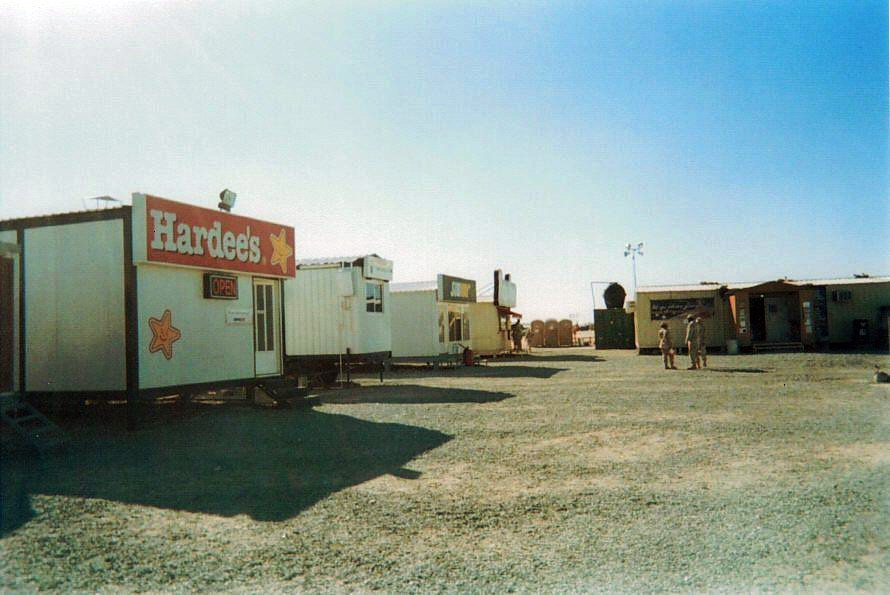 Camp Victory is located in the middle of the Kuwaiti desert; to me the desert resembled a giant beach without the water or cool breeze. In the camp the noise of the running generators sounded like the generators you would hear at an amusement fair. Like a fair ground there were a lot of vendors selling products, and fast food franchises. Yes, pizza, subways, hot dogs and burgers were sold. Perhaps it was the U.S government equivalent to a circus fair ground. We were housed in a large white sixty man tent. Two platoons to a tent; this meant there were more than sixty men housed in a sixty man tent.

Passing through Camp Victory rotating out of Iraq was the 442nd Military Police Company a unit stationed in our Jamaica, Queens Armory. I ran into a couple of dudes who served with me in Bravo battery at the old 187 Field Artillery over twenty years ago (during the 1980’s); SSgt. Santos and SSgt, Badecia both are Police officers with the New York City Police Department in civilian life. They gave me a run down what to expect and were kind enough give me of their snacks that they didn’t need any more and we drank some of the non-alcoholic beer that was sold because real beer was not sold because of an agreement between the hosts Kuwait who has an observant Islamic based gov’t and the U.S gov’t to prohibit real beer & alcoholic drinks.

So now here were are in Kuwait housed in tents being relieved that we are out of that hell hole they call Fort Dix. It’s ironic that the consensus among the ranks is that they would rather spend a year in a war zone rather then spend a year at Fort Dix. That’s how screwed up Fort Dix was. So one day we go to the range located on the Iraqi/Kuwait border. We zeroed in the M16’s and got some practice on the 9MM. I was standing by the bus which was adjacent to the porta-johns. The porta-johns a popular place because everyone at some point in time go there to relive themselves. After numerous people went in and out of the porta-johns, one of our medics went in, did a number 2 (I know because he went in with toilet paper) came out and looked at the terrain and reported that there may be an improvised explosive device (IED). The officials came along looked, then the Police was called, they cordoned off the area and made it off limits. The medic was correct; an IED was indeed planted there. So this led to questions like “how did they know we were there?” some thought it was a conspiracy against the 258.

Before we left the range the medics put in a 9-line medevac request because someone (Cpl. H) got bit by a large black scorpion. I’d say that was the most eventual day in Kuwait. Our stay in Kuwait lasted a month. We were supposed to use the time for post deployment training and get acclimated to the Middle Eastern weather. I don’t know what training they expected us to do, because all we did at Camp Victory was eat, sleep, shop, go to the internet cafe, some worked out at the gym. We also had briefings from the first Army Command Sgt Major, and First Army 2-star General. Some of us took a photo opportunity with the General. It was just as well we cooled our heels in Kuwait because in Iraq, Mutada Al Sadr’s militia the Madhi Army staged their first rebellion.